For the third point on the “Improvement Hell” Challenge I had to draw a figure in action from a reference. As overzealous as I had still been back then I did two sketches for this challenge.

As I had been pleasantly surprised by posemaniacs the last time with the previous figure pose, I went there again. And also used the Random Pose generator again. By this point I made screen shots of my references and more notes on my progress. 😉

This one was a bit more challenging but also more interesting to follow. I have always been horrified by more complex camera angles, especially with non-geometrical characters, but found copying the characters from a reference much more appealing and enlightening. 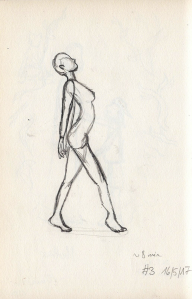 I like the “dance pose”. It reminds me of a ballerina, but also of a character being enlightened or filled with light. You can almost see the wings on her back and a globe of light emerging from her belly.

As I seem to have drawn some female characters before and – in my opinion – managed the s-curve of her torso rather well I wanted to challenge myself a bit further. I searched for another body type and soon found the male pose.

…and a Good Match 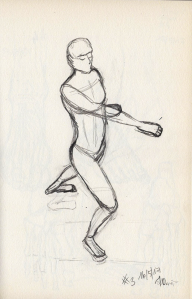 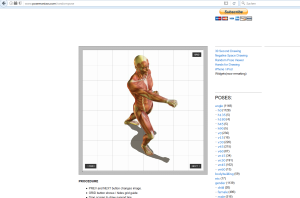 I liked the energetic posture and the challenging angle of this pose. To be honest at first I wasn’t sure if I was up to the task, but in the end my ambitious nature pushed me to do it anyway.

But you can see by the rubber marks that I had quite a challenge with the male figure and the slight top view. Especially the legs and feet were hard on me.

I tried my best and I’m not ashamed. I’m actually rather proud that I tried anyway and feel even more motivated to try to copy some more poses from the website, posemaniacs.com. They also feature kid models and another male model, which is packed with abs. Unfortunately, those four types are the limit of their body shape range.

Might still use them in the future for references, as their range of poses seems endless and a belly or more curves can be easily added by a somewhat skilled penciler. 😉