The Gruesome Truth of my NaNoWriMo Experience

Next time I might take up analogue journalizing, so I remember everything, even if I don’t find the time to post my experience. I now tried to reconstructed the last three weeks of NaNoWriMo, but Week 4,5 is a bit hazy.

Another “next time” is that I won’t work on any other (creative) projects at the same as NaNoWriMo. Writing application letters, and that novelette, and that short screenplay AND those short stories just doesn’t work. One thing, one focus – and I might be able to accomplish the 50,000 words. But to be honest I might not be the person who needs a big challenge to write because I’ve been regularly writing ever since I was fifteen. The reason I wanted to try NaNoWriMo, though, was the fact that I’m not as prolific as I would have to be to be a professional writer. But well, we all live and learn.

I definitely picked up my positive writing habits again, which I slowly had gotten out of touch with during my Multimedia Art studies. You know there’s always something more important during those days. Always willing to improve, this is my result for this year – about as much as I would normally write during one year:

By Week 3, after a not so successful experience during Week 2, I had two days (15 and 16) when I really needed a break from writing every day. I think it was the lowest experience during the month. I understand why many people quit after week two, because I somehow was one of them.

Two excuses I told myself, which might ring true. One, I wasn’t writing on novel like “everybody” else, so of course I hadn’t the same drive. Two, by Week 3 I had kickstarted my Application Writing Process and really enjoyed it. It was fun for the first time, since I started. But of course writing Letters of Application, doesn’t give you too many words. So how to decide what’s more important? Word count with fiction work, which doesn’t solve my job problem, or a chance to get a job by applying, without hitting the daily word count?

I decided for the applications more often than not and also had to do some editing and designing application material (CV, Portfolio), which didn’t give me any words at all – but had to be done. So I ended up with this result: 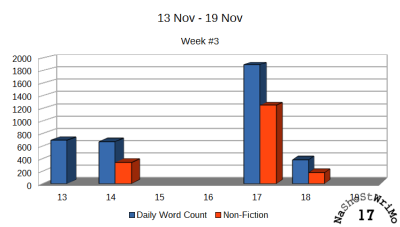 The Fourth Week and the Rest

By the 25th or 26th I got sick. Not something I had before so I got all neurotic and since I had been on and off the “cold” for the past months I decided to lay down, rest and have some sick days like it was the turn of the century again. Which means TV, gaming and only leave the bed, when really necessary. It seemed to help but I still had to deal for it for over a week and still worry about a bit of a relapse. Since I didn’t have fever, headaches or broken fingers, I still felt guilty during Week 5 and tried to write some.

I actually got an idea for a cool short series, which you can see spiking day 28, but in the end I called it quits on Day 30, when I whimsically tried to hit a mid-goal of 20.000 words.

I can’t really tell why I skipped on 21 and 22 but I guess it must have to do with applications. I remember reworking some application documents during the time – so, yeah editing during NaNoWriMo… XD

For Week Four and Five: